CREON is pleased to announce the publication of Chris Twomey,  PARALLAX: Time, Media, and Significance, a 140 page full-color artist monograph and memoir.  Twomey is an award winning artist whose work has consistently pushed the boundaries of technology and concept.

PARALLAX covers the last 30 years of Twomey's art and includes essays by Eleanor Heartney and other art world figures.  Inspired by themes of origins and identity; incorporating film, performance, installation, digital media and sound, “she uses her own life and experiences as springboards for meditations on the human condition and our cosmic and personal state of connectivity.” Eleanor Heartney.

Chris Twomey’s awards include a Ford grant, CAPS, the Kitchen Center, Experimental TV grants and an American Film Institute Directing Internship.  NYC solo shows include those recently presented by CREON Gallery and a mid-career retrospective exhibition at Westbeth Gallery in 2011.  Twomey’s work has been shown extensively around the US and other NYC venues and art fairs with work in the permanent collection of the Museum of New Art, Detroit, Rhizome Artbase, and other private collections.

“In 1897, Paul Gauguin created a painting whose title posed the questions: “Where Do We Come From? What Are We? Where Are We Going?”  For the last thirty-five years, Chris Twomey has taken up a similar investigation in a remarkable body of work that involves film, performance, installation, digital media and sound.  She uses her own life and experiences as springboards for meditations on the human condition and our cosmic and personal state of interconnectivity. The works here suggest some of the places her investigations have taken her.

In the 1970s, Twomey was deeply involved with filmmaking, creating works that reflect the experimental ethos of period. Works like Get Ahead, What’s the Point, Feed Us and Fun and Games suggest a dialogue with figures like John Cage, Robert Wilson, Dick Higgins, Jonas ekas, Stan Brakhage and aya Deren. These short films adopt surrealist juxtaposition, overlays, and animation techniques to reflect the some of the contradictions of female experience. From the late 70s to mid 80s, Twomey turned to a more narrative approach with films like Phenelzine Sulfate, One Way if you Let me, and Love Vindiloo that explored her own and other’s struggles with depression, creativity, and relationships.

During this period Twomey also began to work as a documentary editor and television producer and she had married and become a mother. All these experiences had a powerful impact on her art. In multi-media works that combined photography, painting, and digital imagery, she began to explore themes like the continuity of life represented by DNA passed on through generations, the nature of identity and the interplay of nature and technology.

Works like Big Baby and the CheeriOpus Series used images of babies to talk about genetic manipulation, the formation of identity and the nature of the physical and spiritual nourishment necessary to sustain life. With the Omni series, which mixed images of human navels with text, these questions merged with a more specific medical inquiry. Twomey began to consider the debate over stem cells, which was emerging as a face off between “pro life” moralists opposed to stem cell research and medical researchers investigating cancer cures. This issue gained particular urgency when she was diagnosed for the first time with breast cancer in 2001.

With the Madonna series, Twomey presented DVDs, paintings and prints that featured a racially diverse group of mothers holding babies. The religious connotation here was joined by a scientific one through the incorporation of maps of each mother’s haplogroup, or DNA strands used to trace ancestral origins. Triumph of the XX covered similar territory, using images of embracing men and women as a metaphor for the ability of the female double X chromosome to ameliorate harmful mutations.

New exico indscapes, a set of digitized landscapes, was a more personal work suggesting dreamlike inner realities. With Tsunami 3000, Twomey returned to a cosmic time frame, asking questions about the balance of instinct and reason two thousand years into the future. The most recent work here was inspired by a reoccurrence of cancer. Astral Fluff is a multi-sensory environment that melds the human world, signified by people employed in simple repetitive tasks, and the immaterial one represented by diaphanous clouds of fabric. On a personal level it celebrates the preciousness of the everyday actions that sustain and define life.”

Together these works reveal Twomey’s ongoing search for meaning and continuity in the face of personal change and cosmic uncertainty. Her thoughtful explorations reveal the persistence of the questions that Gauguin posed a century ago.  And her work demonstrates that it is the search for answers that give meaning to both art and life.”

Eleanor Heartney, Contributing Editor to Artpress and Art in and author of Art and Today (Phaidon)


"Chris Twomey pairs the acute observations which so well serve her visual art with her formidable skill as a writer to create an episodic, intensely personal memoir running parallel to this survey of her own career to date. The interplay between text and images in "Parallax" demonstrates rather than explains the connection of Twomey's practice with her individual history, art history, and social history, building resonance throughout to underscore the eternal process of life shaping art (and vice-versa)."
-Linda DiGusta - writer, curator & co-editor of Resolve40.com

"A concise account of Twomey's life as artist, film maker, and woman, detailing the milestones of her artistic and personal life with candor, wit and poignancy."
-Lily Faust, artist, Fulbright scholarship recipient, writer for Art Police
Posted by Chris Twomey at 5:55 AM No comments: 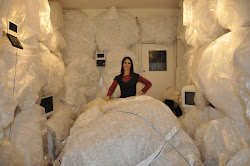 Chris Twomey
Chris Twomey’s body of work, inspired by themes of origins and identity, involves painting, drawing, film, installation, digital media and sound. Using her own life and experience as a female in society as springboard for meditations on the human condition and our interconnectivity, the work explores scientific, psychological, or conceptual ideas that impact our understanding of identity. Graduating from Pratt Institute with a Master’s Degree in Fine Arts, (New Forms) Twomey has received various awards; CAPS grant, Ford Grant, and Experimental TV award and an American Film Institute Directing Internship among others. She is also co-founder of BROADTHINKING.ORG, a collaborative dedicated to visually promoting innovative concepts about peace, ecology, gender politics, and genetics.